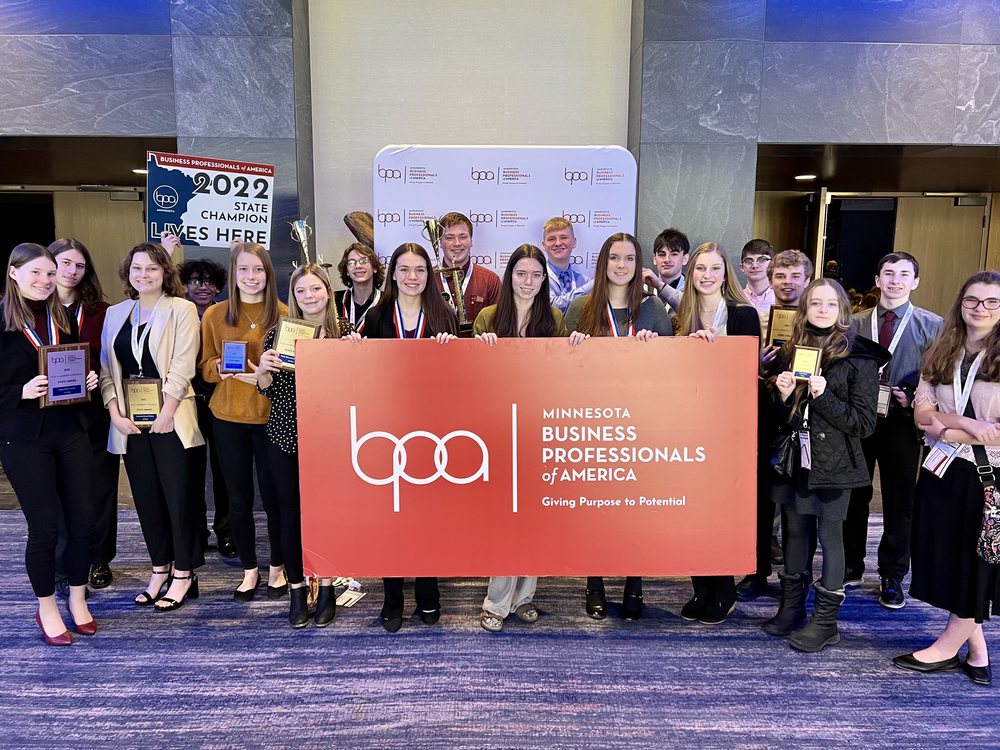 Triton Business Professions of America (BPA) was a force to be reckoned with at the State Leadership Conference March 10-12.  They dominated the competition, crowning a historic four State Champions, ten National trip winners, and an additional four top ten finishers.

Junior Wyatt Bendickson started things off with a bang by earning a place among the Top 10 finalists in the Nation through his virtual Cybersecurity event, and things continued to heat up from there.  Senior Scott Nolan was crowed State Champion in C# Programming, and the Video Production Team made up of sophomores Noah Kleinwort, Alejandro Ortiz, and Quinn Short were crowned State Champions as well.  Junior Talia Kelley scooped up a second-place finish in Graphic Design, while juniors Mariah Busch and Paige DeVetter and senior August Kozisek nabbed third-place finishes in Health Administration, Desktop Publishing, and Web Design.  Rounding out the crew of 10 who punched their tickets to the National Competition was junior Ariana Wennes, who finished sixth in Health Administration.  In addition, freshman Katerina Wheeler graced the stage at the Grand Awards Ceremony for placing seventh in Computer Modeling, as did the Broadcast News team of juniors Talia Kelley, Kaitlyn Krupa, and Lydia Stanton, who placed eighth.  August Kozisek also placed in the top 10 for his Python Programming event, as did Kaitlyn Krupa for Desktop Publishing.

“Historically, this is the most students Triton has sent to Nationals, which in and of itself is a huge accomplishment,” said Advisor Rebecca Goossens.  “But honestly, I’m always the most blown away by just seeing the learning, problem-solving, and business skills our students gain and demonstrate by competing in BPA.  I know that they are prepared to succeed in life; and that’s the biggest win of all.”

The students qualified for the State competition earlier this year by competing individually and in teams in a variety of areas including accounting, video editing, web design, graphic design, podcast creation, computer programming, health administration, information technology, and legal procedures  At the State competition, they put their talents to the test against winners from eight other regions throughout the state and were required to learn and develop numerous soft and hard skills and abilities and then demonstrate their knowledge by taking a test, creating a project, or presenting to a judge.  Industry leaders, business owners, and experts in their fields judged the contest events, where the top five individuals, top three judged individuals, and top two teams from each event earned trips to Nationals.

“For those not familiar with BPA, it might be hard to understand the significance of these students’ accomplishments,” said Goossens.  “To put it in perspective, there are chapters that Triton competes against that have double the members than we have students in a graduating class.  It’s like a class A team just beat a class AAAA team – and they beat them multiple times.”

This May, Bendickson, Busch, DeVetter, Kelley, Kleinwort, Kozisek, Nolan, Ortiz, Short, and Wennes will travel to Dallas, TX to compete with roughly 5,500 top students from across the United States at the 2022 Annual National Leadership Conference – the pinnacle of BPA competition. 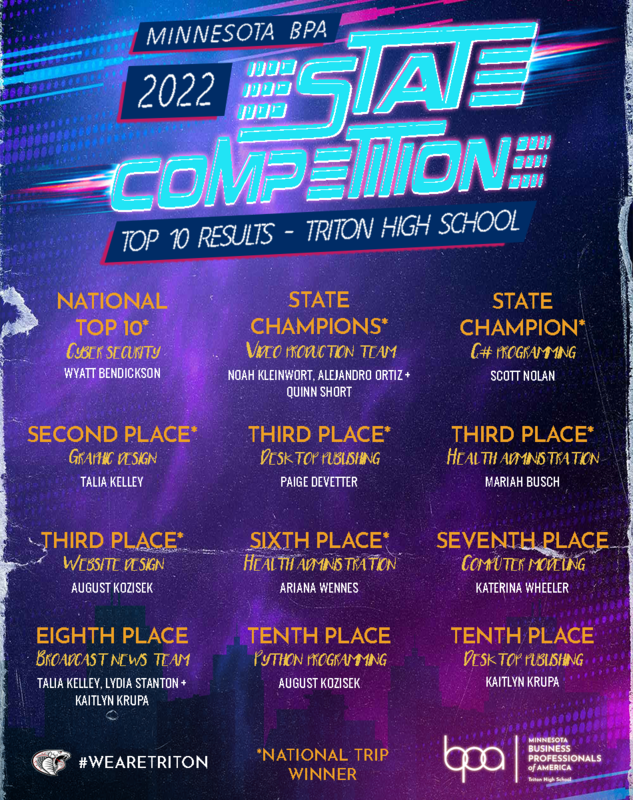